The Duke and the Duchess of Cambridge were greeted by Imran at his residence and met President Alvi at Aiwan-e-Sadr or the Presidential Palace, Geo News reported.

The President and the First Lady Samina Arif welcomed the Royal couple at Aiwan-e-Sadr.

Prince William thanked the President for the warm welcome and hospitality extended to him and his entourage. The royal couple also appreciated the initiatives undertaken by the Government of Pakistan to combat climate change and alleviate poverty.

The couple became the first royals to officially visit Pakistan since Prince Charles and his wife Camilla visited the south Asian country in 2006.

For the meeting with President Alvi and PM Imran, Kate Middleton opted for white trousers by Maheen Khan paired with a bright green tunic by Catherine Walker.

The Duchess accessorised the dress with a scarf by Satrangi and earrings by Zeen. The Duke opted for Western attire again — a dark suit and tie.

The couple became the first royals to officially visit Pakistan since Prince Charles and his wife Camilla visited the south Asian country in 2006.

The Duke and Duchess of Cambridge, Prince William and Kate Middleton, on Tuesday met Prime Minister Imran Khan at the PM House in Islamabad.

They were warmly received by the premier, who has hosted a lunch for the royal guests.

Prior to meeting the prime minister, the couple was welcomed by President Arif Alvi and his wife Samina Arif at Aiwan-i-Sadr.

The Duchess of Cambridge, who was earlier dressed in a royal blue kurta while visiting a girls school, changed into a green and white attire for the formal receptions.

William’s late mother, Diana, was a friend of PM Imran Khan and visited Pakistan twice – 1996 and 1997 – to help raise awareness and funds for the Shaukat Khanum Memorial Cancer Hospital. 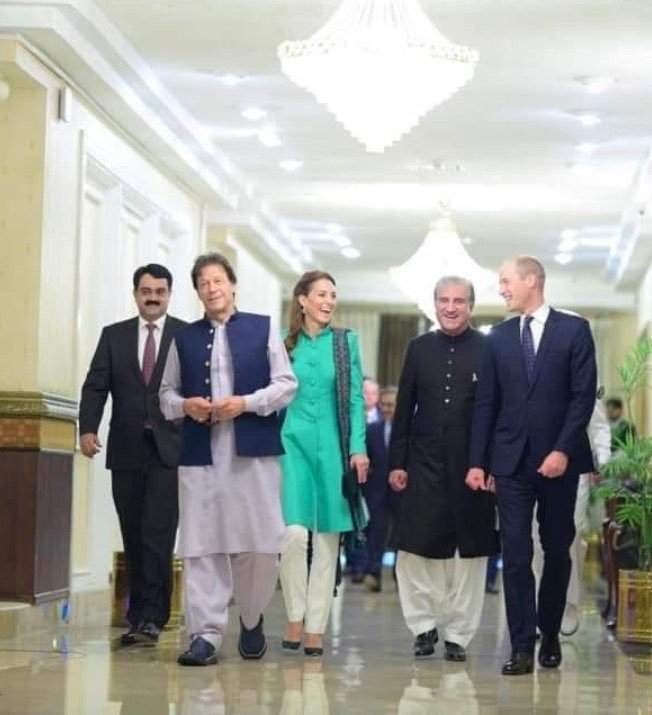 The president appreciated the royal couple for their endeavors to raise awareness about mental health, climate change, and poverty alleviation, said a press release by the president’s secretariat.

Prince William expressed his gratitude to the president for the warm welcome and hospitality extended to him and his entourage. The royal couple lauded the initiatives undertaken by Pakistan’s government to combat climate change and to alleviate poverty, added the statement. 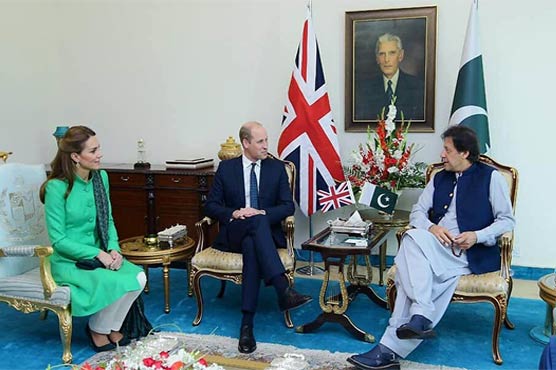 Earlier today, Duke and Duchess of Cambridge, Prince William and Kate Middleton, signaled their support for women’s education in Pakistan by making a girls school the first stop.

The couple both wore blue for the visit to the school in the capital Islamabad, with the Duchess of Cambridge draping a long scarf, or dupatta, over the shoulder of her royal blue shalwar kameez – a traditional Pakistani long shirt with trousers.
Education official Khadija Bakhtiar told AFP that the couple helped some of the students solve problems.

“Both wanted to engage in a natural way… so it was a very nice” visit, she said.

William and Kate spent roughly half an hour at the government-run school, which has an estimated 1,000 students from first to 12th grade, before they were waved off by smiling students. 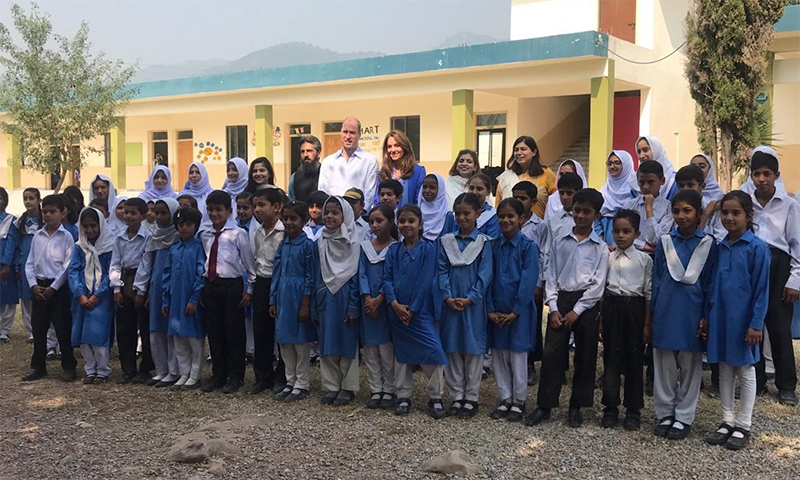 After their visit to the school, they arrived at Trail 5, Margalla to attend an event regarding environmental protection. Strict security arrangements were made prior to their arrival.

On Monday, the British royal couple arrived in Pakistan on a five-day tour as they are “looking forward to building a lasting friendship with the people of Pakistan.”

William and Kate disembarked from the Royal Air Force plane onto a red carpet that had been rolled out for them.

A team of more than 40 doctors, paramedics and medical staff has been included alongside the security squad of the royal couple. More than 40 journalists also arrived with Prince William and Kate Middleton.

The visit comes 13 years after Charles and Camilla – the Prince of Wales and the Duchess of Cornwell – toured the country in 2006. Pakistan still vividly remembers the late Princess Diana’s visit in 1996.

The official statement also said that throughout the tour the couple would visit programmes which empower young people and see how communities in Pakistan are responding and adapting to the effects of climate change.

Sorry. No data so far.